Fertilizer is used to supply plants with the nutrients they need—primarily nitrogen, phosphorus, and potassium—in a form that is easy to use for the plant’s roots. It is typically added to the soil when planting seeds or young plants to help them get established. Fertilizer can or may be added to the soil throughout the life of the plant to help keep it healthy and growing strong. But over-fertilizing can be a bad thing. Too much fertilizer can actually kill the plant and excess fertilizer can runoff into streams and lakes causing toxic algal blooms that are harmful to aquatic life and even people and their pets. Excess fertilizer runoff from lawns and agricultural applications also contribute to aquatic “dead zones” in coastal areas.

Excessive use of fertilizers and subsequent nutrient runoff impact water everywhere, including locally. When fertilizer is applied to a lawn, nutrients are being added – something that all plants need to survive and grow.  What might not be obvious, though, is that the soil may already have sufficient levels of these nutrients for plants to be strong and healthy.  Brand-new lawns or areas with very poor soils might lack nutrients, but most established lawns have enough nutrients.  When healthy, well-established lawns are fertilized anyway, the nutrients (mainly nitrogen and phosphorus) that aren’t used by the grass run off with the next rain (or lawn watering) and end up in our streams and reservoirs where they can feed algae and create other problems.

When too much fertilizer enters the water, it can cause the natural process of eutrophication to speed up. Eutrophication causes algae growth to explode. Algae typically have a very fast life cycle, and when this life cycle is accelerated it causes problems for water quality and aquatic life, primarily by depleting oxygen from the water. This phenomenon, known as hypoxia, results in oxygen levels becoming so low that the water can no longer support aquatic life. The end result is a dead zone like the one in the Gulf of Mexico.

Exposure to high levels of nitrate is also dangerous for animals and humans. If humans consume water with a nitrate/nitrogen concentration greater than 10 milligrams per liter it can lead to a condition called methemoglobinemia, or “blue baby syndrome”, in infants six months and younger. High nitrate levels can also cause problems in pregnant women and those with gastric issues. 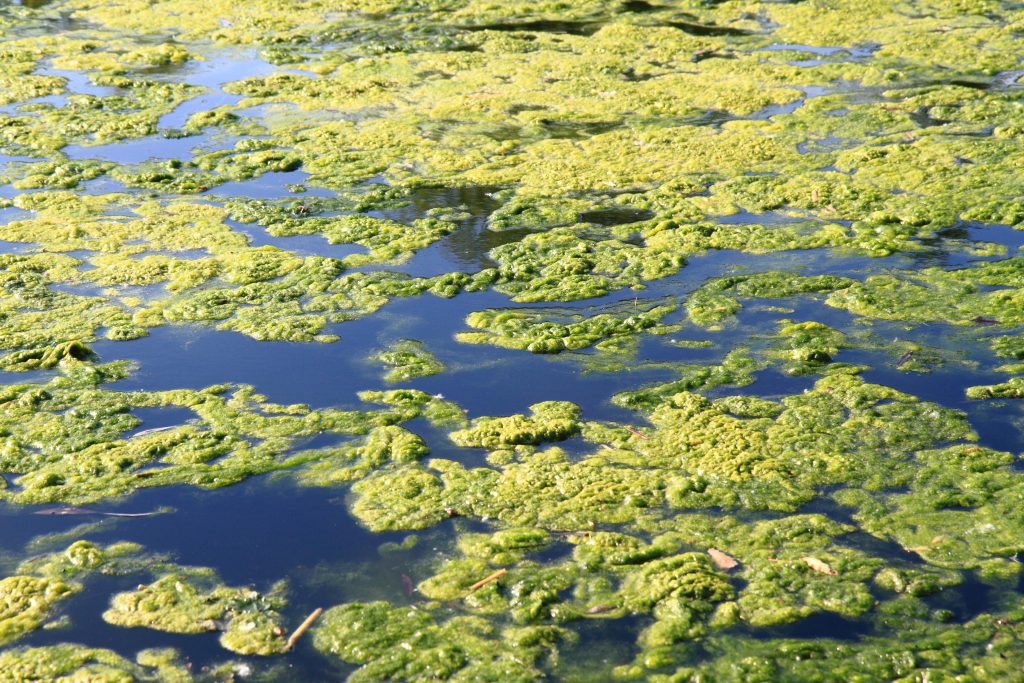 Lawn fertilizers aren’t the only problem – any type of fertilizer can cause an algae bloom. Whether it’s organic or inorganic, manure or bone meal, applied on a lawn or an agricultural field or a golf course, fertilizer is fertilizer. Too much of it is harmful to our water.

Fertilizers used in agriculture are a significant source of nutrient pollution to water. In fact, nitrogen and phosphorus runoff from agricultural fields are some of the largest sources of pollution to coastal “dead zones” across the United States.  Perhaps the most infamous dead zone in the United States is an 8,500 square mile area (about the size of New Jersey) of the Gulf of Mexico, not far from where the nutrient-laden Mississippi River drains into the Gulf. Farms throughout the Midwest drain into the Mississippi and contribute to this nutrient overload. (In Indiana, for example, most of our state drains to the Wabash River, then the Ohio, and ultimately the Mississippi.) The Gulf area dead zone has created massive challenges for the region’s fishing industry that ripple throughout the economy.  Low oxygen levels in the dead zone waters have led to reproductive problems for fish, leading to low spawning rates and egg counts.

In addition to dead zones, excess nutrients in the water and the resulting algae blooms can result in the production of algal toxins and strange tastes and smells in the water. It takes just one (1) pound of phosphorus and seven (7) pounds of nitrogen entering a waterway to produce 500 pounds of algae.

For more information about eutrophication, hypoxia, dead zones, and algae check out the items on the sidebar to the right.

But it didn’t stop there… many states also have regulations on when fertilizer applications can be made. The regulations prohibit the application of fertilizer during the dormant season, typically November 15 to March 1, when plants don’t use the nutrients because they aren’t actively growing. These regulations came about because all fertilizers contain nitrogen, which also contributes to the excessive growth of algae and other nuisance aquatic plants. It can be just as harmful to water quality as phosphorous.

If you do choose to fertilize your lawn, there are several actions you can take to minimize its impacts on water. For starters, make sure to only use the type and amount of fertilizer your lawn needs. Starting with a soil test will help you understand those needs. Then, take the time to properly apply the fertilizer. Be sure the spreader being used is designed for lawn fertilizer application and that it is calibrated for the type of fertilizer being used.

Avoid applying fertilizer between November 15 and March 1. Lawns are unable to use nutrients once they go dormant in this time frame. Never fertilize when the ground is frozen, as the nutrients have nowhere to go except to runoff.

Of course, there is another option: don’t fertilize at all. You can actually have a healthy lawn by opting not to fertilize. By leaving the lawn clippings on the lawn to decompose, valuable nutrients are returned to the soil. Mowing at a taller height (3-3.5 inches) can also reduce pest problems, such as weeds, insects, and diseases.

Eutrophication is a type of pollution caused when excess nutrients, primarily nitrogen and phosphorus, enter the water. The overload of nutrients cause algae to grow uncontrollably, depleting the water of oxygen as they die.

Low oxygen levels in the water is known as hypoxia. In a hypoxic condition aquatic life can become stressed. Water where there is no oxygen is known as an anoxic condition and no aquatic life can survive. While hypoxia is a naturally occurring phenomenon, and has occurred for years, there has been a significant increase in hypoxic areas (dead zones) along shallow coasts and estuaries because of human impact.

For a brief overview of what happens when fertilizers enter our water and eutrophication, check out these graphics.
Fertilizers in Lakes and Streams
Hoosier Riverwatch – Eutrophication Process

Algae are a very diverse group of aquatic plants/organisms that are capable of producing oxygen through photosynthesis. They can be very tiny (microscopic) or large seaweeds like giant kelp. Phytoplankton, pond scum, or algal blooms on lakes are a few of the different types of algae that most people are familiar with, but there are thousands of different species across the world.

Algal blooms, which are known for creating toxic conditions in lakes and oceans, occur because of the fast growth of certain algae leading to the production of toxins. In freshwater, cyanobacteria is the primary toxin producer. In normal conditions, the algae produce the toxins in very small amounts to protect themselves from being eaten by small animals. Algae get a bad rap for the toxic conditions created during algal blooms. The problem however is us! Nutrient pollution, excess phosphorus and nitrogen from either fertilizers or untreated wastewater, causes the uncontrolled growth of the algae that lead to the algal blooms. Believe it or not, but algae are crucial to the environment! They are a major part of the food chain, oil and petroleum products, and most importantly they produce anywhere between 50% to 70% of the oxygen in the air we breathe.

Do your Actions Matter?

You bet they do! See a visual explanation of how your actions are connected to clean water.